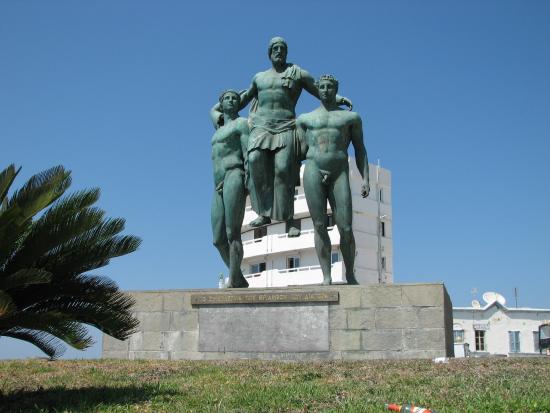 The Diagoras monument is a bronze sculpture dedicated to the ancient Greek athlete and his sons, Damaget and Akusilai. At first glance, the monument is unattractive. They are holding their father in their arms after having won the Olympic games approximately 2500 years ago. The sculpture is installed near one of the embankments in the city of Rhodes on the square of Archbishop Chrysanthus.

Approximately, in 452–448 BC, Diagoras of Rhodes, who had already been a winner of many Olympic games, came to Pankration to support his two sons in the competition. When Damaget and Akusilai won, they raised their father on their shoulders and loudly welcomed all who were present. Diagoras was boundlessly happy. Not only did his children become the bravest and strongest, but they also excelled him. He was very proud of them.

Diagoras was on the top of the world. And then, according to the legend, one of the spectators shouted: “Diagoras, die! Now you have nothing to desire, except to ascend to Olympus!” It is believed that after that, the father really died immediately in the arms of his sons, but before that he said: “I am not scared to die after this!". However, he still remained the happiest mortal who had ever lived on the planet. By the way, Diagoras had a third son who was the youngest one. But historians have not found any other data about him, except that he was quite successful.

There is also another version of this whole story. It is believed that Diagoras had also a daughter, Kallipateira. She is believed to be the only girl who managed to participate in the Olympic games and to attend them. The fact was that women were never allowed to participate in competitions and were forbidden to watch them, because all the male participants were competing naked.

Once, after disguising herself into men's clothes, she sneaked into the crowd and managed to get into the Pankration. This was soon discovered, and the guards took the woman to the tribunal that was judging the competition. The breaker could have been easily executed.

But it was there that Kallipateira claimed that if a woman could break the ban, she would win the Olympic games eight times. The tribunal was very surprised by the claim and agreed. But they did not take into account that Kallipateira had a father, Diagoras, three brothers, a son, Peisirrodes, and a nephew, Eucles. All of them except the youngest brother entered the arena of games many times and won competitions.

The judges were delighted with Kallipateira's crafty suggestion, and therefore acquitted her. Soon after that, some changes were made to the rules in order to avoid such situations and to let women to attend the Olympic games.

A little more about Diagoras

Diagoras was the son of Damaget, the King of Ialis, and a maternal relative of the Messinian hero Aristomenes. According to the legend, the athlete won twice in boxing at the Olympic games, four times at Isthmian, twice at Nemea, and most likely one time at the Pythian games. The football club and the international airport of the island's capital bear the name of the sportsman. And in 2004, a monument to Diagoras was erected on the embankment in Rhodes.

As a matter of fact, even the locals can not answer why the athlete is dressed, and his sons are naked. It is believed that this happened because the boys were holding their father immediately after the Olympic games, where it was customary to compete naked. The spectators were supposed to be dressed.

In 2018, Turkish media reported that the grave of the great athlete was found near the resort of Marmaris. A small pyramidal building on a hill with an inscription in Greek said that the structure in some way refers not only to Diagoras, but also to his wife. Before that, the locals thought that there was a crypt here and used to come here to pray.

Of course, the monument to Diagoras is worthily considered to be one of the attractions and recognizable sculptures of Rhodes. It is even included in the sightseeing tour of the capital. However, it is definitely not worth going to the statue on purpose, especially from another city or village. Except perhaps you still would like to walk around Rhodes and relax on the waterfront with breathtaking views.

In this context, travelers who stay in hotels near the sculpture are very lucky. They can not only literally touch the history, but also learn more interesting stories about Diagoras from local residents. And, of course, swim in the Aegean sea.

When you get to the monument of Diagoras from other cities or from the airport, go to the square of Archbishop Chrysanthus. The sculpture is located near hotels and a gas station. If you still decide to go here on foot while relaxing in Rhodes, take food and drinks with you, so that you can also have a picnic on the embankment and sunbathe.