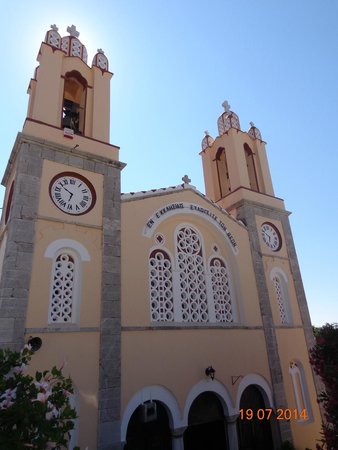 Of course, the city has many shrines. Moreover, there are both built on the foundations of buildings of pre-Christian times and those that were erected in the Middle Ages. Most of them are associated not only with saints and their deeds, but also with important dates in the life of the Greeks and, especially, of local residents. The Church of St. Panteleimon is one of these attractions.

Built on the north-eastern edge of the walls of medieval Rhodes in the late 15th – early 16th century, the temple had much smaller size. In fact, this is about a small room built of stones. Today, only the facade with an arch at the main entrance and a white cross, which is most likely installed in the place of the old one, remind of this.

By the way, the Church of St. Panteleimon appeared owing to the shrine, which is located not far from it. That is the Catholic Church of the Virgin. Together with it, the temple was built on the territory that Grand Master Pierre D'Aubusson acquired in honour of the Greek victory in the battle with the Ottomans, who had besieged Rhodes until 1480. It was then, on July 27, when the Mother of God appeared to the locals who were exhausted by another battle, giving them strength and courage.

On the same day, the Turks lost the battle and left the island, and Pierre D'Aubusson soon decided to erect a Catholic church in Rhodes in order to commemorate the Virgin, who contributed to this. The Orthodox Church appeared because the day of victory over the Ottomans coincided with the date of Saint Panteleimon's memory. By the way, in this way the Grand Master managed to reconcile two religions — Christianity and Catholicism, whose supporters were celebrating the triumph together.

The genuineness of the old building was preserved due to the fact that during the occupation of the island, the Turks did not turn the temple into a mosque, as happened with many shrines in the vicinity of the city. There was a prison here for some period of time, then the English administration used the temple as a police station. The Colonel Bernard Eugene Antoine Rottiere’ report that dates back to 1830, confirm that until the beginning of the 20th century, the Church was a guesthouse where Jewish families lived. Since the early 1900s, the temple building was used as a school for Jewish girls. In 1944, some walls collapsed due to bombing during the war.

The Church of St. Panteleimon began to acquire its current form after 1947, when Metropolitan Timothy of Rhodes restarted Orthodox services in it. Soon two side rooms were attached here and a low belfry made of stone with a white cross on it was built.

The Church has the form of not uneven cross without a dome. It appeared by completing of two rooms of different sizes on the northern and southern sides to the original old single-nave basilica. Pronaos on the western side is also considered to have been constructed later. In the last century, a semicircular niche was added to the temple above the central western door. It is believed that it originally had the decoration of a Rhodesian tent, which was characteristic of the chivalric period as a more modern version of an elliptical arch.

The carved and gilded iconostasis with images of the Saint martyrs Clement and Agathangelos who passed through Rhodes and served under Bishop Fotinos, has been preserved in the Church to nowadays. They are called the patrons of the psalmists of Rhodes and the nearby villages. Moreover, there are fragments of the relics of Saint Panteleimon and Saint Clement, as well as the hat and venerable belt of Saint John the Baptist. It is also interesting that Saint Panteleimon’ life and martyrdom of are depicted on all the walls of the Church. This allows you to find out a detailed biography of the martyr. As for the chapel on the territory of the shrine, it was dedicated to Saints Anastasia of Rome and Ermolai, who were mentors of Panteleimon.

Since the Church is Orthodox, it is as easy to navigate in it as in any other one. At the entrance, you can buy a candle to light it for the health or repose of loved ones.

Walking along Old Rhodes, you will surely see a small Church 15 metres from the north–eastern wall. If you want to get here from another city, use a private car or public transport that goes to the port of Mandraki.